The National Women’s History Month theme for 2016 honors women who have shaped America’s history and its future through their public service and government leadership. Although often overlooked and undervalued, collectively they have dramatically influenced our public policy and the building of viable institutions and organizations. From championing basic human rights to ensuring access and equal opportunity for all Americans, they have led the way in establishing a stronger and more democratic country.
Each of these public leaders succeeded against great odds. The diversity of their experiences demonstrates both the challenges and the opportunities women in public service have faced. Their ability to use the art of collaboration to create inclusive solutions and non-partisan policies, as well as their skill and determination, serve to inspire future generations. The tenacity of each Honoree underlines the fact that women from all cultural backgrounds in all levels of public service and government are essential in the continuing work of forming a more perfect union.
2016 National Women’s History Month Honorees 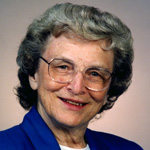 Mary Madonna Ashton, CSJ has an impressive Minnesota-based career in public and private service. She served as president and CEO of St. Mary’s Hospital in Minneapolis, State Commissioner of Health under Governor Perpich, and founded St. Mary’s Health Clinics.
Sister Mary Madonna earned a bachelor’s in sociology and psychology from St. Catherine University (then the College of St. Catherine) in 1944. She holds a Master of Hospital Administration from the University of Minnesota, and a Master of Science in Social Work from St. Louis University. She worked in medical social work and hospital administration, ultimately serving as president and CEO at St. Mary’s Hospital in Minneapolis from 1962–1982.
The following year she was contacted by then Minnesota Governor-Elect Rudy Perpich who asked her to serve as Commissioner of Health, despite tremendous opposition (she was not a physician, she was a woman and a nun!). Sister Mary Madonna served as the Minnesota Commissioner of Health from 1983–1991, successfully addressing smoking cessation and AIDS prevention. She helped pass landmark legislation outlawing smoking in public places and on public property. Testifying for days against the tobacco industry, her success on behalf of the state of Minnesota started a nationwide movement.
Sister Mary Madonna was a trustee of St. Mary’s Junior College from 1974 to 1986 and at St. Catherine from 1986 to 1995 — shepherding both institutions through the merger that would, in 2007, become the Henrietta Schmoll School of Health.
After leaving state government in 1991, Sister Mary Madonna joined other Sisters of St. Joseph in creating what would become St. Mary’s Health Clinics (SMHC) in 1992. Through the ministry, she spearheaded an innovative and compassionate effort to extend healthcare to uninsured citizens. By the time Sister Mary Madonna retired in 2000, SMHC had 11 clinics throughout the Twin Cities, which continue to serve families and individuals who have nowhere else to turn for medical care.

Daisy Gatson Bates was a journalist and Civil Rights activist who famously facilitated the 1957 integration of public schools in Little Rock, Arkansas. Growing up in southern Arkansas during the early 20th century, Bates experienced first hand the poor conditions and discrimination of the segregated school system. She spent her entire adult life standing up to physical threats and other forms of intimidation in order to champion causes of racial equality.
In 1941, Daisy Gatson married L.C. Bates, and moved with him to Little Rock where she helped him run a weekly newspaper called The Arkansas State Press. The newspaper focused on social and economic issues that particularly affected the black residents of the state, and often reported incidents of police brutality. Because the Bates’ refused to censor the details of these brutalities, many white businesses boycotted advertising in their newspaper.
In 1952, Bates was elected President of the Arkansas Branch of the NAACP. In that role she led the protest against the Little Rock School Board’s plan for gradual integration. In 1957, after the school board announced plans to commence desegregation at Central High School, Bates worked with the chosen nine African American students, guiding and advising them as they made their attempts to enter the school. On September 25, President Dwight Eisenhower sent
1,000 U.S. Army paratroopers to enforce the integration of the school, and Bates and the students were escorted and finally able, after many failed attempts, to safely enter the school.
In 1962, Bates published her autobiography, “The Long Shadow of Little Rock.” The following year she was the only woman selected to speak at the 1963 March on Washington. She went on to work for the Democratic National Committee’s voter education drive and for President Lyndon Johnson’s anti-poverty programs. When Daisy Gatson Bates died in 1999, more than 2,000 guests attended her memorial service in Little Rock, AR

Sonia Pressman Fuentes
(1928 – Present)
NOW co-founder, first woman attorney
in the Office of the General Counsel at the EEOC

Sonia Pressman Fuentes is a lawyer, author, speaker and pioneering feminist leader who fought for women’s equality in the work force and helped initiate the Second Wave of the women’s rights movement.
Fuentes was born in 1928 in Berlin, Germany. When she was five years old, she immigrated to the US with her parents and brother to escape the Holocaust, arriving in New York City in 1934. In 1957 Fuentes graduated first in her class at the University of Miami School of Law.
She was the first woman attorney to work in the Office of the General Counsel at the Equal Employment Opportunity Commission (EEOC), a government agency dedicated to enforcing federal employment discrimination laws. While there, she became the staff person who stood for the aggressive enforcement of the gender discrimination prohibitions of Title VII of the Civil Rights Act of 1964. As the person who drafted a number of the initial landmark guidelines and decisions, Fuentes played an extremely significant role in increasing the opportunities for women in the work force in the second half of the 20th century.
Fuentes was one of the founders of the National Organization for Women (NOW) and was a charter member of the advocacy group Federally Employed Women (FEW). Fuentes has also served on the advisory committees of the Veteran Feminists of America (VFA) and the Longboat Key Education Center.
In 1999 she published a memoir, Eat First – You Don’t Know What They’ll Give You: The Adventures of an Immigrant Family and Their Feminist Daughter. Fuentes has dedicated her whole life to making equal rights for women in the work force, as well as in other arenas of society, a reality rather than just a promise. A key pioneer during the Second Wave of the women’s rights movement, the enduring impact of her work is still evident today. For further information on Fuentes, visit her website at http://www.erraticimpact.com/fuentes.