I was paging through a fashion magazine this week and happened to glance at a young woman standing in tree pose.  It was an advertisement for yoga attire but it told a snippet of the story of the young woman.  It told how she had been in a coma for three years and was considered to be in a vegetative state.  I immediately looked up Victoria’s story because having had a child who was diagnosed as vegetative, I am drawn to these success stories.  Victoria’s story is one of amazing determination by her and her family.  Here is her story in her own words.

One small step: My 10-year journey from a wheelchair to walking

I was told it couldn’t be done. My dream was impossible. But on March 3, 2016, after spending 10 years in a wheelchair paralyzed from the waist down, I took my first steps without assistance. That was no easy task.

But first, let me take a step back.

When I was 11, I got sick. My back and side ached, so doctors took out my appendix. Then my legs began giving out. My foot dragged. Within two weeks, I lost all feeling and function in my legs. Next, my hands stopped working. I couldn’t control my arms, couldn’t swallow properly or find the right words when I wanted to speak. It was as if someone was slowly shutting down the switches on the circuit board that controlled my body and brain. I was slowly slipping away from my family.

Then everything went dark.

Two years later, I woke up inside a body that could not move. I was locked in. I could hear the conversations going on around me, but I had no way of alerting anyone that I was aware they were there.

It took three years for doctors to diagnose me with two equally rare conditions: Transverse Myelitis and Acute Disseminated Encephalomyelitis, autoimmune disorders that caused swelling in my brain and spinal cord. I’ve since learned that, had my doctors diagnosed me correctly in 2006, a steroid injection could have prevented all of this. But at the time of my diagnosis, they offered my family little hope. They told them I would be a vegetable for the rest of my life. I heard those conversations.

But my parents believed in me. They set up a hospital room in our house in New Hampshire, and took care of me. My three brothers — I’m a triplet and we have an older brother — talked to me and kept me in the know about what was going on outside of my room. They empowered me to fight and get stronger. They didn’t know I could hear them, but I could.

Then, in December 2009, I made eye contact with my mom. Slowly over the next year, I began coming back to life. Raw sounds became words, became sentences. A twitch of my index finger became the wave of my hand. The ability to swallow pudding eventually led to me mowing on a steak. I learned the name Justin Bieber, held my first cell phone and learned what it meant to “poke” someone on Facebook. But despite daily progress, one thing never returned: my legs. I was told the swelling had caused permanent damage to my spinal cord and I would be paralyzed from my belly button down for the rest of my life. Every specialist told me the same thing: “You need to get used to being in a wheelchair.”

I’d already overcome the impossible. I’d woken up and re-learned to live. My idea of what is possible had changed. When my doctors said I would never walk, I didn’t believe them. I knew I wasn’t meant to spend my life in a chair.

Although I believed I would walk again, I knew it would be a long, difficult road littered with challenges I couldn’t foresee. I remember coming home from high school one day crushed because kids were bullying me because of my chair. I had been so happy to return to school and after that day, I didn’t want to go back. As my crying subsided, my parents promised they would do whatever it took to help me to walk again. They kept that promise. They never lost hope.

At some points, hope was the only thing I had. When I began my journey toward walking again, I clung to hope like a life raft. There is a Helen Keller quote that I saved in a journal I’ve kept along this journey. “Optimism is the faith that leads to achievement. Nothing can be done without hope and confidence.” I had hope; I was still working on confidence.

Growing up, I was a water baby. We lived near a lake, had a pool in our backyard and as soon as I was old enough, I joined a swim team. By 10, I was winning local events. As I began to heal from my illness, I came to the sad realization that I would never swim again. I didn’t think I could swim without my legs. But my brothers disagreed, so in 2010 they threw me into our pool. I was terrified. But it was a turning point in my life. It was the “jump” I needed to get back to my life. When I was swimming, I was free from the chair. And to my surprise, I was still good. In the water, I found freedom — and my confidence.

In 2012, at 17, I made the USA Paralympic swim team and competed at the London Games. I brought home three silver medals and a gold in the 100-meter freestyle. I set a world record in the 100-meter free. When I returned home, I was met with quite a bit of fanfare. All of a sudden, my chair and I were thrust into the spotlight. I was invited to speaking engagements and appearances. People recognized me at the grocery store. I began telling my story to television reporters and newspaper writers, becoming a beacon of hope to so many around the world. But I never lost my hope and vision for getting out of that chair.

As I pushed toward my goal of walking, I found the hope I needed at Project Walk, a paralysis recovery center based in San Diego. Through the Dardzinski Method, an activity-based therapy, Project Walk has helped many people dealing with paralysis to regain function and even walk. My mother and I temporarily relocated to San Diego and lived with family so I could train every day. We realized this was the place that could help me, but we didn’t want to live hundreds of miles away from my brothers and dad. So, keeping their promise, my family decided to open the first Project Walk franchise on the East Coast. This way, I could train every day and achieve my goal, while others in my hometown could regain the hope they needed, as well. In 2013, my mother had asked one of my specialists what the possibility was of me ever walking again. He told her, “I wouldn’t mortgage the house.” Well, my parents mortgaged our house and in 2015, they opened Project Walk Boston.

It became my refuge. Despite agonizing frustration, I put in everything I had every day, spending thousands of hours working and fighting for one flicker of a sign that my legs were still alive. For the longest time, I didn’t see even a twitch of movement below my level of injury.

Then, on Nov. 11, 2015, I took a small step. I was strapped into a harness above a treadmill and two trainers worked to move my legs. It had been six years since I “woke up” and my legs had shown no life. Most doctors say if there is no improvement after two years, there will be no improvement. Still, I showed up every day, for up to six hours a day, and worked. That day, one of my trainers noticed a flicker, a small movement from within my right leg. It wasn’t much, but it was all the hope I needed. I harnessed that flicker and fanned the flame. Slowly, I began regaining movement in my legs. As they became stronger, I began sitting less and walking with the aid of forearm crutches and leg braces more frequently.

Five months later, on March 3, 2016, I let go of the crutches and put one foot in front of the other. I haven’t stopped since. I sometimes feel like the Will Ferrell character Ricky Bobby in Talladega Nights. Without my chair, “I don’t know what to do with my hands.”

That’s not to say every day is perfect. Walking is still challenging and I still have significant impairment. I wear leg braces, follow a training program for two-to-three hours per day and on the days when my legs feel more paralyzed, I have my chair or crutches on standby. But my struggle is now less visible. Only my trainers, those closest to me and I know the extent of the damage and the effort it takes for me to continue to progress each day. Only they see the thousands of hours of training, 15 different pairs of leg braces, three wheelchairs and all the blood, sweat and tears. Sometimes my recovery and the regimen I have to keep feels like a second job. But it’s all worth it. It’s been 10 years since I was able to look someone in the eye instead of staring at everyone’s butts all day.

Without the chair, there is no obvious evidence of my journey, no wheelchair or pink crutches to explain the past 10 years. They were such a reminder of what had happened to me that with them; I never felt I could truly move on or be free. But standing was scary, too. I was incredibly nervous about announcing this news. I was unsure how people would react to me. But then I realized this is my journey and nobody else’s and maybe it can give hope to people who need it most.

For the past two months, I’ve been finding my new identity and reflecting on a turbulent 10-year journey. I’m 21. I’m in the public eye. My identity to many is that of a girl in a wheelchair, a Paralympic gold medalist, a television personality for ESPN and a survivor. Standing upright felt like drastically changing my hair and then worrying what everyone else would think. I wondered if I would be accepted without my chair. But I needed to be comfortable and at peace with my new identity before I could ask the same from others.

So far, the reaction has been incredible, so many tears and hugs and so much support. It’s been fun surprising my family and friends and giving them a proper hug. I didn’t do this on my own, and I am grateful for everyone who has helped me to this point. Each day, I become more comfortable with my new reality. I thought taking those steps on March 3 would be my finish line. But really, they were only the beginning. 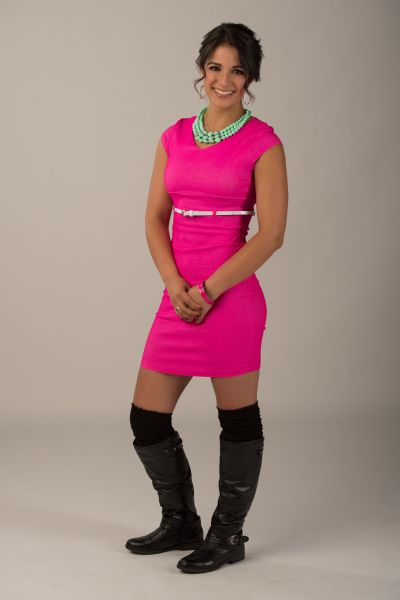