LET’S HEAR IT FOR THE GIRLS!

I went in search of another story about an inspiring girl and didn’t have to look very far.  Please read about Gitanjali Rao who at 12 years old recognized that water polluted with lead was a massive problem for many people worldwide and set out to help.  She has invented a lead detection system.

Gitanjali Rao, a seventh grader from Colorado, has been awarded the title of “America’s top young scientist” for designing a compact device to detect lead in drinking water, which she believes can be faster and cheaper than other current methods.

The 12-year-old’s invention was inspired by the water crisis in Flint, Michigan, where cost-cutting measures led to tainted drinking water that contained lead and other toxins.

It also won her a $25,000 prize, for which Rao already has plans: “I plan to use most of it in developing my device further so that it can be commercially available soon,” she told CNN.

“After I learned about Flint,” said Rao, “I continued to research and follow it for the next couple years. Then, I saw my parents testing for lead in our water and that is pretty much what sparked the idea. I realized that using test strips would take quite a few tries to get accurate results and I wanted to do something to change this, not only for my parents but for the residents of Flint and places like Flint around the world.”

Since lead does not affect the taste, smell of appearance of water in any way, the only way to detect it is with a test. There are currently two main ways to do so, home testing strips or lab testing. The strips generally cost between $15 and $30, can detect various contaminants and offer quick results, but they are not designed for maximum accuracy. That requires the more rigorous lab testing, which involves collecting a sample of water at home — specific kits are sold for around $10 — and then sending it to a lab to get detailed results, which can cost an additional $20 to $100, according to the EPA.

Rao thinks her device could become a competitively priced alternative: “The prototype cost just over $20 to make, but all of the materials were custom-manufactured. At bulk, I expect the production cost to be significantly less than that.”

The device, called “Tethys” after the Greek Titan goddess of fresh water, uses carbon nanotubes, microscopic cylindrical structures that have a range of unusual properties and innovative applications. Inspired by an MIT project that employs them to detect hazardous gases in the air, Rao decided to try them in the water: “My solution uses carbon nanotubes to detect lead in water faster than any other current techniques. It has a carbon nanotube sensor, to which special atoms are added that react to lead,” she said. 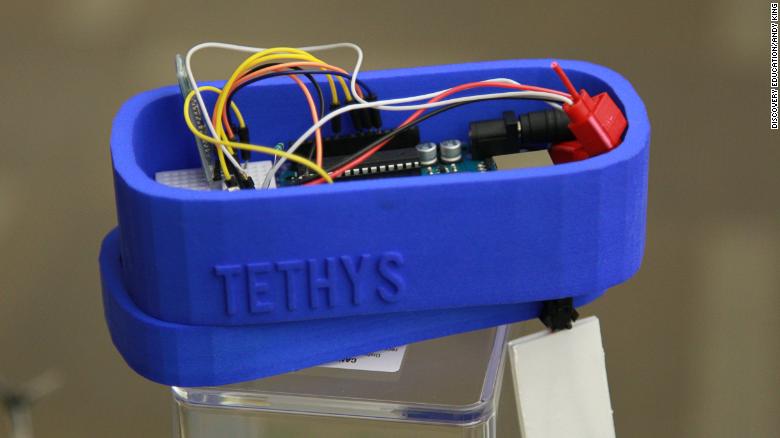 When dipped in contaminated water, the special atoms react with lead molecules and add resistance to a flow of current in the nanotubes, which is then easily detected by the device: “The amount of resistance is proportional to the amount of lead in the water. The processor includes an attachment that sends the measurements over Bluetooth to a smartphone. The smartphone app, that I custom developed, captures this data and shows the results on a user-friendly scale.”

Rao thinks that Tethys will be better than both lab testing and strips: “Testing water in labs is the most accurate test available today, however, it takes time and requires expensive equipment not easily accessible to everybody. On the other end, test strips are easy to use, but they do not quantify the contamination and are sometimes inaccurate requiring multiple tests.”

“My solution addresses all of the above issues. It uses a disposable cartridge that can cost as low as a dollar, it is fast, accurate and it shows lead contamination levels on a regular smartphone, that are easy to interpret and take appropriate action,” she said.

The seventh-grader, who attends the STEM School in Highlands Ranch, Colorado, originally submitted the idea to the Discovery Education 3M Young Scientist Challenge, an annual youth science and engineering competition for middle school students in the US, inaugurated in 2008. She was awarded a 3-month mentorship with Kathleen Shafer, a research specialist who develops new plastics technologies: “Gitanjali’s concept was at a very early stage at the beginning of our mentorship. She had thought of this idea earlier this year, only a few weeks before the submission deadline,” Shafer told CNN. 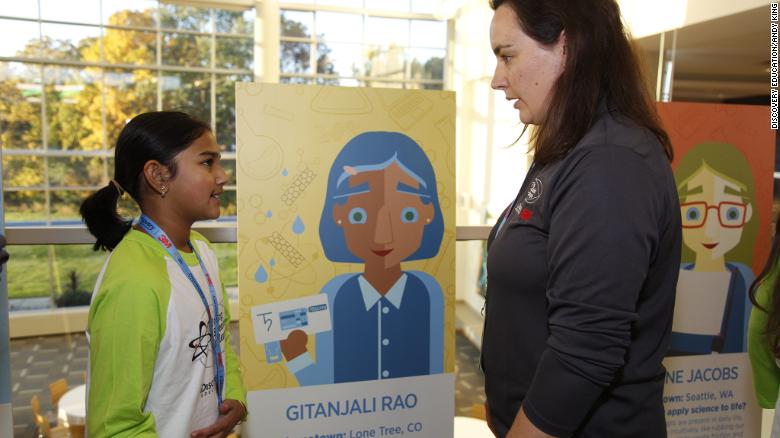 Along with nine other finalists, she then presented her work to a panel of 3M scientists and school representatives from across the country, and won: “I think the judges recognized the significant progress Gitanjali made over the summer, advancing her project from a cardboard box prototype to building out Tethys’ software and 3D-printed hardware. She also initiated some fundamental lab studies to investigate how aspects of her proposed sensor could work in the future,” said Shafer. She remains cautious about the commercial future of the device: “For commercial products, it’s important to establish technical feasibility, manufacturing feasibility, and a strong business case. As mentors we really focus on supporting the finalists in the early research phase of technical feasibility.”

Rao, on the other hand, has clear plans: “I hope to make it commercially available in the next year so that it’s in everybody’s hands.”

The information came from CNN.

I invite you to leave a link to a post about a remarkable woman, young woman, girl in the comments section.