Since March 8th was International Woman’s Day, I dedicate this edition of Feminist Friday to the women everywhere in the globe who are still striving for equality.

During World War 2 women were encouraged to go into the work force to replace the men who were fighting the war.  There intellectual skills were acknowledged and women were invited to bring these skills into all sectors of the war effort.

After the war women were essentially told to go home and make room for jobs for the men returning from the war.  If you were lucky enough to get a college degree, a woman still worked as a secretary and basically was told that college and working were just ways of marking time until they got married.

Betty Friedan, the Mother of Feminism, graduated from Smith College during this period of time.  Despite a keen intelligence and a desire for a career, she ended up a frustrated housewife in the suburbs.  Her frustration was not at being a housewife (a horrible term) but at the lack of choice.

Betty wrote a book called the Feminine Mystique and helped spark the second wave of the feminist revolution in our country.  And, as they say, the rest is history.

I was going to write a straightforward biography of Betty and then came across this article from the New York Times that addressed the complexity of wanting a career and wanting to be a good mother.  I hope you find it interesting.

THE MOTHER OF FEMINISM

Jonathan Friedan, Betty Friedan’s middle child (and my third cousin), spent much of August 1970 fighting forest fires in Washington State. When his backpack was stolen, the 17-year-old hitchhiked back to New York City. His mother divorced the year before and moved to an apartment on West 93rd Street. Jonathan happened to come home while she was in the final stage of planning a march down Fifth Avenue. “I had no idea what was going on,” he told me recently.

The previous spring, Friedan decided she wanted to mark Aug. 26, 1970, the 50th anniversary of the constitutional ratification of women’s right to vote, with a major event to show that the promise of equality had not been achieved. She floated the idea at the fourth annual meeting of the National Organization for Women, which she had helped found. Her audience cringed, fearful of a flop.

Friedan was determined to come up with a plan that would prove the doubters wrong. It wasn’t easy. In June, about 30 women showed up for the first strategy session for what they called the Women’s Strike for Equality. (To boost participation, the “strike” would take place at the end of the working day.) The planners sat in a circle, and the meeting was conducted without a leader — in other words, chaotically. Throughout the summer, factions sniped. “A younger band of radicals,” The New York Times Magazine reported three days before the event, “found Miss Friedan’s way of doing things ‘hopelessly bourgeois.’ And Miss Friedan’s older, more conservative faction countered by calling the younger women ‘crazies.’ ” Natalie Gittelson Lachman, a writer and Friedan’s close friend for more than 40 years, recalls “how afraid Betty was that the whole thing would fizzle.” But Friedan worked relentlessly to prevent that from happening.

A day or two before the strike, family friends of the Friedans arrived from out of town for a visit to New York. Jonathan’s mother hadn’t asked him to go to the march. But the friends wanted him to take them. He agreed out of pity. “I’d seen the Charlie Chaplin movie where he marches down the street waving a flag with no one marching after him. I thought at least there’d be four of us,” he says.

But once Jonathan got to Fifth Avenue, he couldn’t get anywhere near his mother. The street was teeming with people. When the march ended at Bryant Park, Jonathan climbed up on a wall so he could glimpse Friedan standing on a podium. She spoke to an audience in the tens of thousands. “This was the moment I realized who she was,” he says.

The Women’s Strike for Equality “made the women’s movement a household word,” says Ruth Rosen, the author of “The World Split Open: How the Modern Women’s Movement Changed America.” It was the first feminist event to make the TV news and the front pages. President Richard Nixon issued a proclamation commemorating the anniversary of women’s suffrage. Gov. Nelson Rockefeller declared Aug. 26 a holiday. “It totally eclipsed Betty’s expectations,” Lachman remembers. And Jonathan’s. How many 17-year-old boys get to see their mothers make history with thousands of people marching behind them?
In the end, Friedan pulled off a remarkable show of unity. An array of liberal and radical women’s groups signed on to a pragmatic agenda: equal opportunity in work and education, a right to medical help with abortion and free 24-hour-a-day child care. Those goals were ambitious then; they still are today. And aspects of the day’s theater — like planned “tot-ins” at which mothers would plop their babies in the laps of employers and politicians — seem bold as well as quaint.

But it would be a whitewash to stop there, and Betty, whom I spent time with as I grew up, was never one to whitewash. Betty’s older son, Daniel, a physicist, missed the march, probably because he was in Europe. And her daughter, Emily, then 14, missed it because she was angry with Betty. “It wasn’t her fame I resented,” says Emily, who is a pediatrician. “It was her, as a mother. I regret that I didn’t go. I probably regretted it then. But I wasn’t going to do anything with her.”

In her eulogy for her mother, Emily said: “Betty referred to us as her undeserved bonus. She marveled in the three of us and her grandchildren, stunned that in her blundering, she had actually pulled it off.” About the time of the strike, Emily reflects, “the same phenomenal strident energy and drive and perhaps lack of grace that made her able to do what she did maybe weren’t adapted well to mothering adolescents, especially through a divorce.”

What does it mean that the mother of feminism was for a time not necessarily a good mother to all of her children? Lachman says she thinks that anyone in her friend’s dual roles would have strained to fill them at that heady and inchoate moment. Maybe she’s right. And maybe if Betty had been the male leader of a social movement, the question would go unprobed. But shouldn’t we ask it of all parents? I think Betty would answer yes. 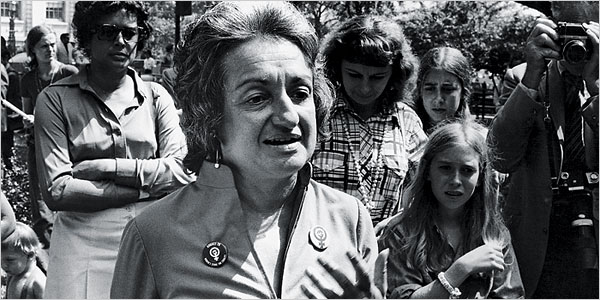 The above information is from an article in the New York Times Magazine, The Mother of Feminism
By EMILY BAZELONDEC. 31, 2006