Katie Paterson (1981) is a Berlin-based visual artist from Glasgow, Scotland whose multimedia artworks concern translation, distance, and scale. Paterson holds a BA from Edinburgh College of Art (2004) and an MFA from the Slade School of Fine Art (2007), she is an Honorary Fellow of the University of Edinburgh (2013).

She has developed a project combining books, hopes for the future and the environment.  What follows is an article from the Huffington Post about this fascinating project called the Future Library.

When we imagine libraries 100 years from now, many of us might picture sterile environments more like computer labs than book depositories — or even cloud-based apps from which we’ll be able to access digital books without moving from our seats. It’s not a vision print book-lovers savor.

For artist Katie Paterson, books remain inextricably bound with the earth and the paper they’re printed on. This relationship inspired her project “Future Library,” in which she’s commissioning authors to help write 100 works to be kept in the trust for 100 years. They will be published in a limited-edition anthology in 2114, on paper made from 1,000 Norwegian spruce trees planted near Oslo last year. 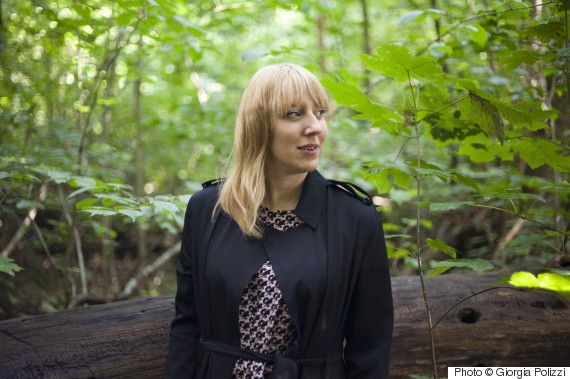 “The idea to grow trees to print books arose for me through making a connection with tree rings to chapters — the material nature of paper, pulp and books, and imagining the writer’s thoughts infusing themselves, ‘becoming’ the trees,” explained Paterson in an email to The Huffington Post. “Almost as if the trees absorb the writer’s words like air or water, and the tree rings become chapters, spaced out over the years to come.”

While technology often seems to move at the speed of light, books grow like trees do: slowly, meditatively. Though Paterson said the project isn’t a “directly environmental statement,” it “involves ecology, the interconnectedness of things.”

And, like environmentalists, she wants to inspire us to think about the world we’re leaving for those who will come after us. The span of 100 years until the project’s completion was chosen carefully to challenge our own mortality in a very tangible way, she explains. “It is beyond many of our current lifespans, but close enough to come face-to-face with it, to comprehend and relativize.”

It’s easy to live for now, accepting the rapid changes our world is undergoing because we presume we’ll be gone by the time it’s past saving. Certain things, however, like our irreplaceable natural resources and the joy found in books and libraries, are surely worth protecting for future generations, as the Future Library inspires us to remember.

Of course, by the time the project comes to fruition, Paterson herself almost certainly won’t be alive to ensure its completion, but she seems unfazed by the inevitable letting go. “When I had the idea for Future Library, I knew instantly it would outlive me (and most of us alive today),” she said. And as for the possibility of the project being abandoned before 2114, she’s sanguine: “We have an incredible project director who can move mountains (or, in this case, plant a forest for a century), a group of foresters who I have great trust in, and a dedicated Trust; all will be passed down.”

The Future Library Trust is tasked with ensuring the manuscripts remain locked up until 2114, and with selecting authors for the series.

Though Future Library sounds something like a time capsule, it’s more of a rolling-admission anthology. One author will be announced every year until 2114, “so the project doesn’t become static,” explains Paterson. The first author, Margaret Atwood, submitted her piece, entitled “Scribbler Moon,” last month — it will be locked up in the City Archive in Oslo — and the second author, David Mitchell, was announced recently. That these first two are acclaimed writers of speculative fiction is no coincidence. “In different ways, both authors’ works travel through time, imagine and project into future times and places,” said Paterson. “Two key words in our Trust’s author selection process are ‘imagination’ and ‘time.’”

Margaret Atwood on the day of her piece’s submission.

Atwood, said Paterson, compared the invitation to Future Library to being asked to donate a kidney to a loved one: “You either say yes or no immediately, and I said yes.” (Future Library, Katie Paterson, Photo (c) Kristin Von Hirsch 2016)

The Future Library’s plans seem diametrically opposed to the popular vision of the future of libraries. The manuscripts will be kept from the public longer than necessary, rather than rushed to them; the publication will be limited to 1,000 paper copies rather than infinite digital ones. Readers will also be able to visit the original manuscripts in a reading room at the new Oslo Library opening in 2019, said Paterson: “It will be a small, intimate room, encouraging only one or two people at a time, containing the manuscripts with the author’s name, the title of their text and the year visible. We will be building the room using the trees we recently cleared from the forest, still containing the scent of the trees.”

How rarely, as readers today — and in our imagined future — can we see a book so tantalizingly before us that we’re unable to instantly read? How rarely are we encouraged to think of the connection between the book we’re reading and the tree that created the paper it’s printed on? (If we’re using an e-reader, it’s even easy to forget the environmental connection — the energy sources and minerals powering the screen.)

Technology has built a society of instant gratification, at least for the relatively affluent, and there’s no doubt that it feels good. But so does delayed gratification. Though the 100 years of waiting may be frustrating, the payoff may be accordingly sublime.

Most importantly, the Future Library sends a message that to preserve our world and our culture, we need to relearn patience, planting the seeds now for solutions that will be our children’s children’s salvation.