May is Honor Older Americans Month. I am dedicating this column to honoring the many wonderful women who are using this bonus time in their lives to blaze trails filled with creativity. Many of us, like Esther Ritz, embraced creativity as a natural part of our lives and now continue to invent and reinvent new avenues for that creativity during this portion of our lives.

What follows is an interview with Esther Ritz done by Priscilla Frank that first appeared in the Huffington Post on June 3, 2015.

Born in New York City, Esther Ritz spent most of her life in Dallas. She married, had children, finished law school, worked in real estate and, at the age of 55, became an artist.

Ritz grew up amid the rise of Expressionism, and recalls regarding Picasso as one of her favorite artists. Both influences are discernible in her vibrant, acrylic-on-paper paintings, which take root in the depths of the imagination and grow outward in all directions like a mutant weed. Ritz’s work echoes a variety of eras and movements, depending on your vantage point.

From one angle, her canvases recall the blaring colors and confrontational passion of Dorothy Iannone; from another, the spiritual storytelling of Marc Chagall. Look closer still and you’ll see a contemporary glare, reminiscent of the trending “slacker aesthetic“ embodied by artists like Misaki Kawai. 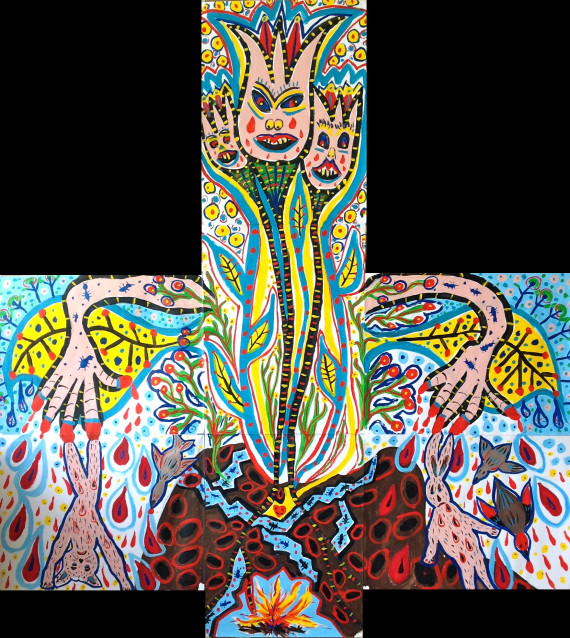 Ritz’s work occupies many different styles and spaces, which isn’t surprising — she’s consumed a lot of images. The humble revolutionary told The Huffington Post more about her artistic journey.

Let’s start at the beginning. Tell me about your childhood and, if you remember, your earliest experiences with either making or seeing art.
Well, I was born in New York City and lived in New York for a couple of years as a baby. Then I lived in Newark, New Jersey, where my Dad was from, in a middle class Jewish neighborhood until I was about 12. Then we moved south. First we moved to Charleston, South Carolina, for a few years and in the ninth grade I moved to Dallas, where I live now.

In terms of my interest in art, I give my parents a whole lot of credit. They always encouraged me and gave me lessons. One of my earliest memories — I must have been maybe 10 years old. My parents bought me this real artist set with a wooden box and all these paints and brushes. I felt very grown up. As a child and even as a teenager I was always encouraged. In my later teenage years I let the whole thing go. I dropped it for quite a long time, got married, had children. I went back to school and got a law degree. There were 25 years where I didn’t do anything.

You didn’t do any art whatsoever?
Every once and a while I’d do Sunday painting type of thing, but nothing serious. I retired from the business world in about 1996. In between I had gotten a law degree and after that gone into commercial real estate. I finally retired in the mid-‘90s and that’s when I really began focusing on my art. I’ve been at it now around 18 years.

Growing up did you ever think you would work as a full-time artist?
I did have these fantasies! When I became a teenager, and started dating and becoming social, the whole thing kind of went away. I was in my mid-twenties I would occasionally take painting classes at the community center and would have these fantasies about being a big famous artist. But they were just fantasies.

Do you remember being inspired by any female artists in particular growing up, either that you knew personally or from afar?
When I was young, I don’t think I was aware of any female artists, quite frankly. We’d go into New York sometimes and go to the museums, and it was important for my parents to expose their children to art and culture. But I honestly don’t think as a child I knew of any female artists. Of course, as an adult, it’s a whole different story. But not when I was little.

Do you remember being disturbed by the lack of female representation in the art world?
I have to say, the women’s movement didn’t really kick in until the late ‘60s, and the awareness of their being no women didn’t even really begin until then, I think. Then women began asking, “Where are all the women artists?” When I was a child in the 1950s — I was born in ‘42 — nobody was wondering where the women artists were at that point.

But I would say my parents never said to me you can’t do this because you’re a woman. I have to hand it to them, they were amazing.

Did you ever take steps to become a working artist earlier in life?
Before I went to law school I wanted to go to architecture school, but at that point I was married with kids, so that wasn’t a possibility. I think things like visual art and color have always interested me, but it wasn’t until I didn’t have to worry about making a living that I could throw myself into the art completely and really get going.

It seems pretty rare to discover this immense artistic power in yourself after so many years, especially in a field that’s often seen as youth-centric. What would you say to others out there who may not realize that beginning an art career later in life is an option?
I wouldn’t discourage anyone from being an artist starting out younger! But I would certainly say don’t not try it at a certain age because you think you’re too old. If you want a second career, start it whenever you are ready. I would definitely encourage that.

Are there any major benefits in particular from delving into your art career now as opposed to earlier in life?
One of the biggest advantages of doing it at this time in my life is that I don’t need to show the art. I don’t have the financial pressure there or the pressure of needing a day job. Creatively, it frees you up tremendously.

I would never have done the kind of work I’m making now if I thought, “I have to sell this thing.” It was very much an emotional, internal kind of thing. From that point of view I think it’s a good thing, not to put yourself into the financial pressure of needing to make art sell. 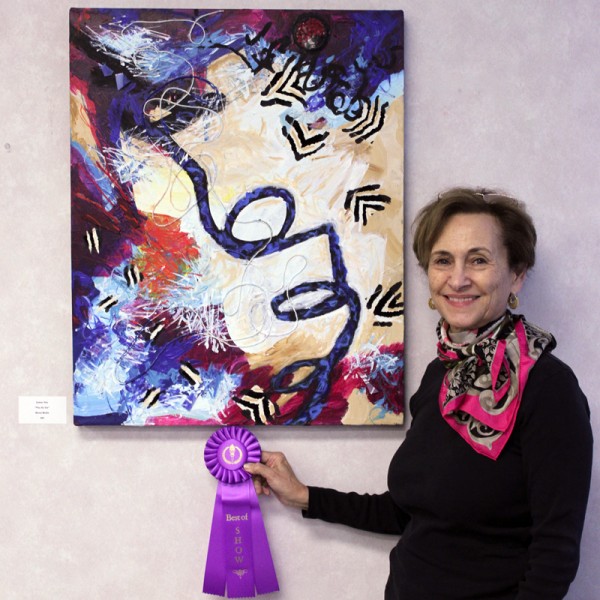